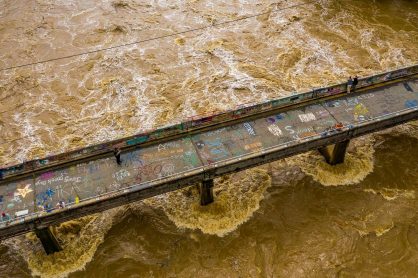 The Bynum Bridge spans the Haw River in the piedmont of North Carolina. It was built between 1922 and 1923 and was considered state-of-the-art design and engineering at the time.  The reinforced concrete tee beam bridge has a length of 806.1 feet stretching across nineteen spans of about 43 feet each. Only one tee beam bridge in the state is known to have been longer, and it was built 30 years later and replaced in 2001, leaving Bynum Bridge the longest to remain. It has been a pedestrian bridge since 1999, when for safety concerns it was blocked to automobile traffic. It is used for a 4th of July picnic, stargazing, birdwatching, yoga, walking group meetups and strolling over the river – connecting the two halves of Bynum, NC.

Bynum Bridge was entered into the National Register of Historic Places on April 23, 2020.

in: Things to Do | Sights | Historic Sites | Nature | Explore | Shop

Things to do and places to see...

Stay in the loop for new events and happenings!