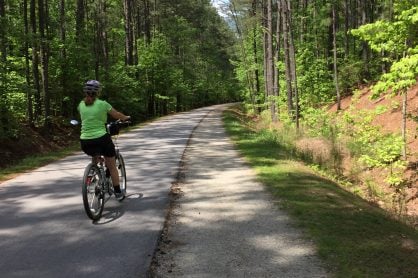 The American Tobacco Trail (ATT) is a 22+ mile rails-to-trails project located in the Research Triangle Region of North Carolina, with 4.5 miles through northeast Chatham County. The route crosses through the City of Durham; Durham, Chatham, and Wake counties; the planning jurisdictions of the Towns of Cary and Apex; and passes through the Lake Jordan project land of the U.S. Army Corps of Engineers.

The natural surfaced trail (grass, clay, gravel) is accessible to hikers, cyclists, and for limited equestrian use. The ATT is the site of the annual Tobacco Road Marathon.

Background:
Paving from Massey Chapel Road south to the Chatham County line was completed early in 2013 and the short section along Massey Chapel Road was completed in late November 2013. Sections north of Renaissance Parkway and connecting to the bridge were completed early in 2014. The bridge spanning I-40 had numerous delays on the protective fencing and opened on February 19th 2014. Data on the usage of the ATT in 2013 before the bridge was open and in 2014 after the bridge was opened were collected by researchers at NC State University. For more on the trail and recent usage patterns, please read their December 2014 report on the behavioral effects of completing a critical link in the ATT.

Things to do and places to see...

Stay in the loop for new events and happenings!